25 years of user involvement- how much has it changed things? 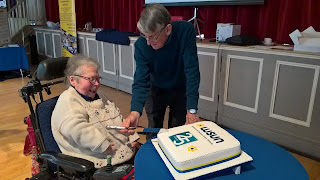 It was the first user involvement group locally, and became the leading democratically elected generic users’ network at the time, formed in response to the 1991 NHS and Community Care Act.  This Act recognised, for the first time enshrined in legislation, the value of involving users and carers in the planning of Community Care. It grew to be a network of several hundred disabled people of differing perspectives, conditions and experiences, willing to give their views to improve services.  This continues to exist countywide today.

Of course, there had been organisations of disabled people emerging in other places from the new social movement for some years but such specific ‘user involvement’ networks were particularly targeted at long term users of health and social care. As such it attracted much interest from policy makers and researchers- the requests for conference speaking and exemplar book chapters seemed endless and we hosted seminars called the ‘Wiltshire Experience’ for fellow groups of users across the country inviting a single professional locally to add their experience! Has the model had a lasting effect on the landscape of community care?


From the start it was about developing the ‘art of the possible’ techniques without compromising our position, to bring about change to better meet users’ needs. We developed three catch phrases to describe the techniques we found to be most effective.
‘From Bobble Hats to Red Jackets’ described the journey we, as service users, needed to go on to recognise ourselves changing from ignorant outsiders (in tatty bobble hats) to empowered participants with valuable expertise and the red jacketed uniform of professionals. The red jackets my colleague and I wore for the official launch of Community Care in April 1993 gave voice to this feeling of personal empowerment and acceptance by professionals. The change in their attitude as they learned to treat us as equal voices was noticeable.


‘Riddling the system’ was a powerful way of describing our technique of negotiating to have service users’ voices heard at all levels of planning service delivery and strategy. Tentative, usually new to the network, user voices concerned with an initiative would meet safely together in a group of their own with a facilitator and all costs paid to explore their needs. Their collated comments would be taken to a more strategic planning level by user representatives and we also expected to work with elected members to explain the issues for users. In this way everyone was informed of the issues for users and users felt their views had been taken forward in a democratic way to bring the change they needed. I once calculated the Network was involved in giving their views in social care in 64 different ways! This phrase became so well known that one of our principal allies, the Director of Social Service, Dr Ray Jones, reported that he felt ‘well and truly riddled’! 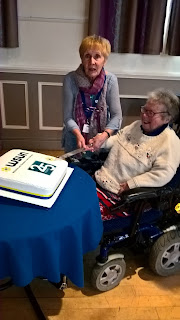 Finally it became obvious that ‘working with allies’ in the system was the most effective way of bringing about change. ‘Allies’ were individuals at all levels of the system who understood the need for users’ views to be heard if services were to become user-led. Their understanding and willingness to go the ‘extra mile’ to ensure users’ views were brought to decision makers’ attention was crucial to our voices being taken seriously. 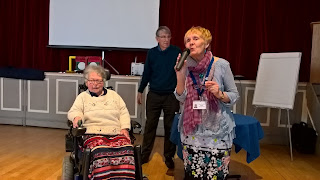 So, did anything change? It was of course much more difficult than we had imagined- we were after all trying to change a culture of “professional knows best”. Short term however, there were successes, which affected some people’s experience of services. For example, professionals spoke of having “light bulb” moments; we co-produced “Wilf”, the 3rd party cash payment scheme set up in 1993 before direct payments became legal; and voicing older people’s need for a nail cutting service for months eventually led to the setting up of a scheme which overcame health and safety objections.

Is it indulgent to think that service users’ voices are now seen as part of the community care landscape? – The effects of austerity and attitudes to marginalised citizens mean we must always be on our guard.

Clare Evans
I’m a disabled person using a powered wheelchair and VW Transporter to get about and live in rural Wiltshire with my husband and cat. I have two adult children and two grandchildren. I’ve had an interesting career, mostly in the voluntary sector, helping other disabled people speak up and give their views on services to shape them to their needs. I now chair Wiltshire Centre for Independent Living which assists people purchasing their own care with direct payments and self-funders. I’m now available for one off commissions of related work and write regularly on this blog page.